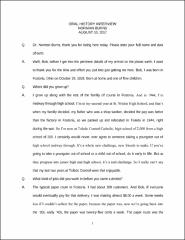 In an interview conducted at the Medical Heritage Center at The Ohio State University, Dr. Norman Burns discusses his dental education at Ohio State and his dental career afterward. Burns, who was born in Fostoria, Ohio, began his undergraduate degree at the University of Toledo, transferred to Xavier, but returned to Toledo to finish his bachelor of science degree. He had wanted first to go to medical school, but he switched to dental school, graduating from The Ohio State University in 1957. He practiced in Egerton, Ohio, for three years before spending the rest of his dental career in Bryan, Ohio. In 1970, Burns was awarded the Alumni Centennial Award for the Ohio State University’s bicentennial celebration, representing the alumni of northwestern Ohio. He also was involved with the formation of the OSU Dental Alumni Society in 1977, and he served as the society’s first president. Burns retired from his practice in 1989, then began working at Ohio State in the dental recruitment and admissions office. He served in this position for 15 years. In 1996, Dr. Burns was awarded the Mershon Alumni Award, reserved for the university’s most outstanding alumni.