Interview of Howard A. Werman by David Bahner 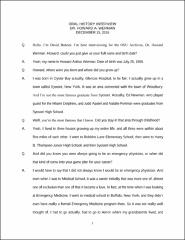 In an interview conducted at the Medical Heritage Center at The Ohio State University, Dr. Howard Arthur Werman discusses his career as an emergency medicine physician and professor at the College of Medicine. While attending medical school at the University of New York at Buffalo, Werman initially considered a career in surgery, but a mentor encouraged him to consider emergency medicine. After doing a short rotation at Akron City Hospital in 1980, Werman visited Ohio State's new emergency medicine program. He moved to Columbus in June 1981 to become a member of the first residency class of Emergency Medicine at Ohio State. Werman also began to do research with a colleague, Chuck Brown, on cardiac resuscitation and transitioned to a faculty position in Ohio State's Department of Emergency Medicine in July 1985. He became an Assistant Professor in the mid-1980s and a full professor in the late 1990s. He also served on the National EMS Committee for ASET, and co-authored one of the first papers on "Do Not Resuscitate" in the pre-hospital environment. In addition, he served on the original board for Ohio State's early Sky Med program. In the mid-1990s, Werman transitioned to clinical faculty.