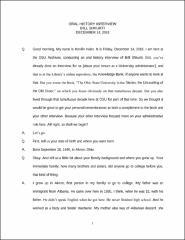 Born in 1946 in Akron, Ohio, Bill Shkurti was among the first wave of baby-boomer students to come to Ohio State. Shkurti majored in economics, but one of his roommates joked he was an "activities major," because he was so involved on campus. For instance, he was the secretary for the Men's Residence Hall Association before it combined with the Women's Residence Hall Association to form the South Campus Student Association (SCSA). He then served as SCSA president for two years. Shkurti recalls various events and people from this turbulent period on campus, including the campus climate after Martin Luther King, Jr.'s assassination, and the firing of a professor who burned his Vietnam draft card in class. After graduation, Shkurti served in Vietnam, then returned to campus in 1972 to obtain a master's degree in the then-new Public Administration graduate program. Shkurti reflects on the social and professional opportunities Ohio State provided him, and on how campus changed during and after his time as a student.