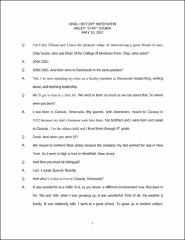 In an interview conducted at the Medical Heritage Center at The Ohio State University, Dr. Wiley "Chip" Souba describes his varied career as a surgeon, researcher and administrator, including his four-term as Dean of the College of Medicine at Ohio State. Born in Caracas, Venezuela, his family moved to Westfield, New Jersey, when Souba was 15. He received his medical degree from the University of Texas at Houston and a doctorate from Harvard. Souba began his career in the Department of Surgery at the University of Florida, where he remained for six years, eventually becoming full professor. Souba then took a position as the Chief of Surgical Oncology at Massachusetts General Hospital, where he served for about eight years. Souba then served for seven years as the surgery department chair at Penn State-Hershey. After leaving Penn State, Souba took a position as the Dean of the College of Medicine at The Ohio State University, serving from 2006 to 2010. Souba also served as Interim CEO of the medical center while at Ohio State. After leaving Ohio State in 2010, Souba became the Vice President and Dean of College of Medicine at Dartmouth University.