Understanding the Relationship Between Sex Trafficking and Opioid Use in Central Ohio: An Application of Sociological Deviance Theories 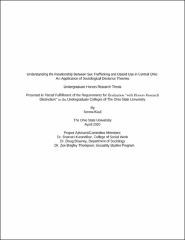 Central Ohio is, unfortunately, a hub for both sex trafficking and the opioid epidemic. The purpose of this study is to better understand how the opioid epidemic has affected the prevalence of sex trafficking in Central Ohio. The objectives are to explore the experiences of anti-trafficking service providers in handling sex trafficking and opioid use cases in Central Ohio, to understand the relationship between sex trafficking and opioid use in Central Ohio, and to compile next steps in tackling both issues based on perceived barriers according to service providers. Phone interviews were conducted with eight anti-trafficking service providers from Central Ohio and overarching themes were identified. Findings suggest that opioids are used by traffickers to exploit vulnerabilities and lead women into trafficking and then used to maintain control over the victims once they are trafficked. Then, victims may start using opioids in order to cope with traumas they face. Some people also end up getting caught in the cycle of trafficking after selling their bodies to receive money for drugs to fuel a previously existing addiction. Additionally, it appears that personal drug use has increased among individual victims who are trafficked and that the drug of choice has shifted from crack cocaine to heroin, an opioid. Lastly, victims of sex trafficking and people who abuse opioids face similar barriers that prevent them from seeking out or obtaining professional help, like such as shame, stigma, lack of education, and lack of availability of resources. By applying sociological theory, furthermore, Howard Becker's Labeling Theory is deduced to have more support in the context of trafficking and opioid use over Emile Durkheim's Anomie Theory. In addition, providing more resources and education about addiction and mental health care, and approaching trafficking from an intersectional and sociological lens may be a critical way to help prevent trafficking from occurring in the future.