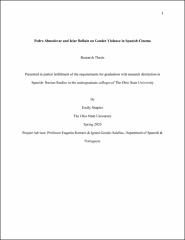 This study sought to determine whether Franco-period conservatism and traditionalist values played a role in the portrayal of women, as well as gender violence, in the post-Transition cinema of Pedro Almodóvar and Icíar Bollaín. Four of Almodóvar's movies were studied and categorized in two parts: pre and post 2000's. From Bollaín, three movies were studied, all released after the year 2000. The year 2000 is marked to represent a change in Spanish society's views of gender violence and governmental action was taken to protect women in abusive relationships. The study finds that while traditionalist ideals from the Franco regime are clearly represented in both Almodóvar and Bollaín's films, the purpose is primarily to show a distinction between the oppressive period against women and the obstacles women must battle for equal liberties in relationships and society after the Transition, showing that although Francisco Franco has not been in power, the morals from his time as dictator have a lasting effect on women in Spain.