In Search of Piety: Why Muslim Iranian Angelinos Convert to Christianity? 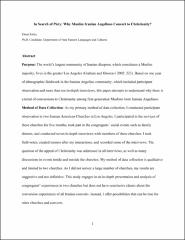 The world's largest community of Iranian diaspora, which constitutes a Muslim majority, lives in the greater Los Angeles (Graham and Khosravi 2002: 223). Based on one year of ethnographic fieldwork in the Iranian Angelino community, which included participant observation and more than ten in-depth interviews, this paper attempts to understand why there is a trend of conversions to Christianity among first-generation Muslims born Iranian Angelinos. Unlike the previous scholarship on the Iranian conversations to Christianity that explain tendencies to Christianity as a "strategy" to get asylum status and eventually immigrate to the global north, my research claims that many of the conversations are genuine and with the aim of achieving piety. My interlocutors critiqued Islam as an "easy religion" and repeatedly stated that "Christianity is hard." They believed Islam was not strict enough and could not make them pious. The congregants expressed Christianity appeals to them because it is a "rigorous" way of life that "guarantees" piety for its followers. They explained that Christianity "works on your heart" and pays attention to all details of life while Islam only cares about external actions. As one of my interlocutors put it, "in Islam you are allowed to think about being with women other than your wife; but in Christianity Jesus has said 'if you think of the neighbor's wife you have already committed adultery.'" Aligned with Islamic laws, both churches forbid corporeal pleasures such as consumption of alcohol or extramarital relationships. However, they believed these laws were "not enough," and piety should be achieved by a constant attempt to "plant the love of Jesus Christ in [their] hearts," perpetual introspection, and scrupulous self-examination.