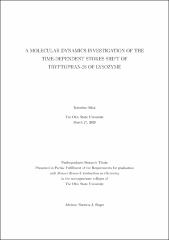 The time-dependent fluorescence of tryptophan, an amino acid residue with an indole chromophore, reports on the dynamics of the chromophore's environment as it relaxes in response to the charge redistribution accompanying photo-excitation of the chromophore. As such, the time-dependent fluorescence can provide powerful insights into biomolecular dynamics. However, the capacity to report on environmental dynamics rests on the ability to interpret the fluorescence signal on a molecular level. Here, detailed atomistic simulation can provide understanding of the photophysical behavior underlying the experimental signal. In simulations, the time-dependent fluorescence Stokes shift, S(t), is calculated from the change in potential energy of the chromophore's surroundings, consisting of the rest of the protein, water, and ions, as the components respond to the change in the chromophore's charge distribution. Deconstructing the Stokes shift into three regions, there is general agreement on the dynamics of the inertial decay in the sub-picosecond region, as well as the water librations in the 1-2 picosecond region. However, disagreement arises pertaining to the dynamics of the long-timescale region, which ranges from tens to thousands of picoseconds depending on the protein. Proponents of the "biological water" model, which explains that there is an rigid hydration layer surrounding a protein, suggest that long-timescale dynamics are an intrinsic feature of water. Conversely, we, as well as others, advance that the slow dynamics result from protein motion as the system relaxes in response to photo-excitation of the chromophore. Because simulations of tryptophan-28 of lysozyme have been proposed as evidence of "biological water", the primary motivation of this work is to simulate the time-dependent fluorescence of Trp-28, provide detailed analysis of the origin of the long-timescale dynamics, and, ultimately, debunk the claim that the long-timescale dynamics arise from intrinsically slow water. Using non-equilibrium molecular dynamics, we simulate the systematic response to the charge redistribution following photo-excitation in a flexible system in which all species are capable of responding, a frozen protein system, and a frozen protein and ions system. We find that the water, protein, and ionic contributions to the Stokes shift have slow components in the flexible system. With only protein frozen, we find that the long-timescale component of the water contribution remains and is nearly, if not exactly, equal in magnitude and opposite to the ionic contribution. Furthermore, the long-timescale components of all contributions, including that of the total Stokes shift, disappear when both protein and ion motions are frozen. Addressing our secondary motivation of this work, we correct a dielectric continuum model suggesting that protein and water should have equal and opposite responses. While the dielectric continuum model is not valid as originally proposed, it does apply in a different context and explains our observation that the ions and water have equal and opposite long-timescale responses resulting from slow diffusion of ions and coupled ion-water motion from the water molecules in the polarization layer of counter-charge surrounding the ions. Therefore, we conclude that the long-timescale dynamics in the water contribution to the Stokes shift of tryptophan-28 of lysozyme arise from coupled protein-water and ion-water motions, not intrinsically slow water in the "biological water" model.