Investigating the Potential for Green Infrastructure to Mitigate the Urban Heat Island Effect in Columbus, Ohio 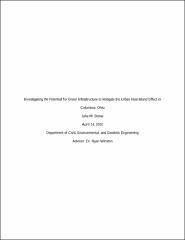 The urban heat island (UHI) effect is the thermal enrichment of air in urban environments caused by the presence of traditional urban infrastructure and human activities. As urban areas develop, vegetation, which contributes to evapotranspiration and thus cooling effects in the outdoor air, is replaced with low-albedo, or low-reflectivity, surfaces that absorb heat. Green infrastructure, including green roofs and bioretention cells, is typically designed for stormwater treatment but its co-benefits may include mitigation of the UHI effect by increasing plant density and reducing the presence of low-albedo surfaces in urban areas. Bioretention cells and green roofs in four distinct neighborhoods of Columbus, Ohio, were outfitted with sensors to record air temperature every minute at ground level and two feet above the surface. Each treatment site was compared with a nearby control of traditional infrastructure with identical measurement techniques. The bioretention cells, green roofs, and their controls all had varying characteristics including size, design, surrounding land use, and plant species and density. Of the bioretention cells analyzed, three were considered not able to mitigate the UHI effect compared to their controls; one could somewhat, and one could considerably mitigate the UHI effect. Of the five green roofs analyzed, two could somewhat mitigation the UHI effect and one had considerable mitigation capacities at 60 cm. Based on the controls used and temperature difference results, grassy areas and white roofs may also contribute to UHI effect mitigation. Shading of sites throughout the day may also have a notable effect on results. Green infrastructure design is crucial to assess contribution to UHI effect mitigation but is highly dependent on control comparisons in the nearby area and should be assessed on a case-by-case basis. Bioretention cells and green roofs have the capacity to mitigate the UHI effect to a noticeable degree and thus UHI effect mitigation should be considered as a possible co-benefit.

The Sustainability Institute at The Ohio State University