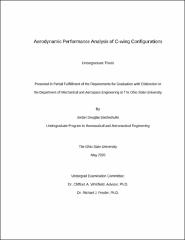 This thesis investigates the aerodynamic performance of a C-wing. The primary goal of this study was to investigate how the vertical length, horizontal length, and sweep angle of the wing affect the performance of the C-wing. The performance characteristics for each wing were simulated using vortex lattice method in OpenVSP. OpenVSP was run using a wing with known data to determine appropriate settings and panel size. It was concluded that the change in coefficient of lift, drag, and lift-to-drag ratio of the wing changed relatively linearly as the size of the C-wing increased. It was also found that changing the sweep angle of the vertical section had very little effect on the performance as the sweep angle was increased and changing the sweep angle dynamically in flight could be used to control the aircraft. It was also concluded that the C-wing had a locally ideal performance range for coefficient of lift, drag, and lift-to-drag ratio when the vertical length was 12-17% and the horizontal length was less than 12%.