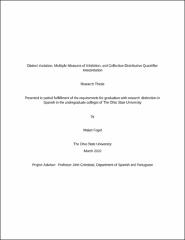 Children appear to learn many dimensions of language very quickly, especially word and sentence structure. It is somewhat surprising, then, that their comprehension of distributive sentences such as "Each minion pushed a rock" to refer to multiple minions, each pushing an individual rock, is delayed as long as it is. Research suggests that it may take until children are 10 years-old to grasp these interpretations in the adult-like way (e.g. Hanlon 1986, Brooks & Braine 1996). To understand what causes this relatively long developmental trajectory, researchers have investigated the role of non-linguistic cognition in producing these interpretations. Some work (Oates 2016; Grinstead, Oates, Padilla-Reyes & Nieves-Rivera under submission) suggests, for example, that the inhibition component of executive function abilities aids children in disambiguating the collective and distributive interpretations of quantifiers such as “some” and “the” in child English and Spanish. Specifically, children’s inhibition abilities, measured on the Flanker task (Eriksen & Eriksen 1974), is predictive of their distributive and collective interpretations. In this study, we use the Flanker Task, the Continuous Performance Task, and the Anti-Saccades Task to measure inhibition in 6- and 7-year-old children. We also use a Truth Value Judgement Task to test participants’ collective-distributive interpretations. We were also interested in studying whether dialectal variation, on analogy with bilingual children, would affect the collective-distributive interpretations of our participants. The Continuous Performance Task, and the acceptance of each in a collective context were found to be predictive of the acceptance of some in a distributive context. Additionally, among our dialect groups, we found significant differences in the acceptance of each in distributive contexts and some in collective contexts, but there were no significant differences in inhibition scores. This suggests inhibition may play a role in the acquisition of collective-distributive quantifiers and that the differences among dialect groups are not attributable to inhibition.