The Ability to Unite Under Crisis: Ethnic Group Consolidation During Ethnic Conflict in Latin America 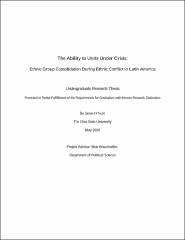 Ethnic conflict in Latin America has pervaded the region since the colonization of the Spanish. This tension has been present between Latin America's extremely diverse ethnic groups, social classes, and state governments. In specific instances, the region has shown that consolidation under conflict is possible. Due to the ever-widening gap between the wealthy, Caucasian elite and the Indigenous, or otherwise ethnic, minority, groups of rebelling ethnic individuals have combined in the face of the shared threat of repression and inequality. When faced with increasing hardship, in order to form long-lasting, large rebellions, ethnic minorities can replace their highly salient, specific ethnic identities with the broad identity of "being ethnic" or "being a minority". This process is shown using an agent-based model that was developed with the goal of understanding the relationship between the costs of secession/rebellion, the strength of attachment that ethnic individuals feel towards their identities, and the impact of a highly severe, repressive environment. From the model, it can be concluded that while rebellions that are formed by individuals with highly salient ethnic identities are often quicker to develop, rebel movements that are created and grown by individuals who have more moderate attachments are able to better succeed. Also, rebellions can be formed from multiple ethnic groups if faced with a severe enough situation, a shared willingness to set aside ethnic differences, and mutual status of being "ethnic".