Patterns of Relationship Behaviors among Narcissists 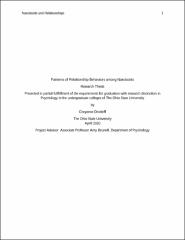