Informal Learning in a Museum Setting: A Case Study with Language Science 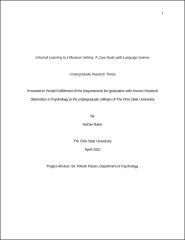 Informal science learning experiences (ISE) – including activities and demonstrations in science museums – are an important source of science learning throughout the lifespan (Miller, 2004) and an important way of fostering desire to engage with scientific information (Sentürk and Özdemir 2014). Science understanding is noticeably low among the general public (Funk and Goo 2015). ISE offers a promising opportunity for filling in the gaps of the public’s scientific understanding. ISE has typically been conducted using traditional science fields (such as physics), however we propose that using a nontraditional area of science could serve to appeal to audiences that are typically less engaged with science. For instance, women are typically less interested in science and technology careers, despite having equal aptitude for those fields (Aud et al, 2010). By presenting science using alternative fields, we may be able to engage broader audiences. This study explored family learning outcomes when interacting with an informal science activity based on language science. The activity was based around the Stroop Effect and was designed to teach learners that reading is an automatic process. We examined how participants interacted with the activity to explore factors associated with a better understanding of the educational content of the activity. Twelve family groups participated consisting of 20 adults and 19 children. Participants were videotaped as they engaged in the Stroop activity and through a follow-up interview. Sessions were transcribed and coded using emergent coding to reveal the types of statements that were made by participants. The majority of statements were related to either the educational message of the game, science as a concept/field, or the nature of the activity itself. Each of these main categories contained unique subcategories of responses that were examined as well. Overall, the activity was successful at conveying scientific information using language science. Every group contributed discussion relating to the educational message of the game, and 67% of the groups demonstrated a full understanding of the content. Adults and children both discussed the activity more than science or the educational message. Within these three main categories, adults and children contributed different percentages of subcategory responses. For example, a greater percentage of science statements made by adults were related to scientific information than those made by children. Several types of responses were associated with level of discussion a group made that demonstrated an understanding of the activity’s educational message. Most notably, the percentage of statements made by a family focusing on the sensation of engaging with the activity was associated with a greater percentage of statements that reflected a full understanding of the activity’s content (R2= 0.43). Additionally, the percentage of statements focusing on reading-related aspects of the game was negatively associated with full understanding (R2= 0.41). The results of this research suggest directions for improving the design of informal science activities and demonstrate the potential benefits of using a non-traditional science field to educate the public.