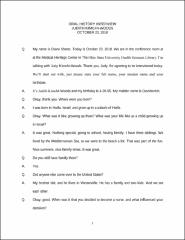 Born in Haifa, Israel, Judith Kimchi-Woods attended the University of Haifa and was trained as a nurse at Rambam Hospital. It was during her training there that the 1973 Yom Kippur War occurred, and she cites her experiences treating wounded soldiers as formative. In September 1976, she and her husband moved to Columbus. While Kimchi-Woods earned her bachelor’s degree at Ohio University, she received her master’s, doctorate and nurse practitioner degrees at Ohio State University. Kimchi-Woods has had a varied career, from working at Children’s Hospital to teaching at Miami University to serving as director of the pediatric unit at Northland Terrace. While earning a master’s degree in business administration from Franklin University, Kimchi-Woods began working for Chamberlain University’s College of Nursing in Columbus, where she now serves as the campus President.