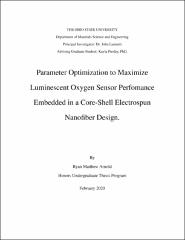 Oxygen is a critical molecule to several biological processes, making its detection important to several biomedical applications. Oxygen sensors designed using luminescent quenching molecules embedded in an electrospun nanofiber matrix offer several advantages over conventional oxygen sensors, including biocompatibility, ease of miniaturization, and high sensitivity. One of the inherent issues involved with using such a design is the phenomenon of photobleaching, which entails the photochemical degradation of the luminescent quenching probe molecules, resulting in a net loss of emission signal intensity. In this work, several different parameters were explored to determine which would minimize photobleaching to optimize device sensitivity and longevity by measuring changes in sensor molecule emission signal intensity and over time under different conditions. Electrospinning was used to fabricate "core-shell" fiber configurations, where the luminescent oxygen-sensitive molecules were embedded in a polymer "core" with a structurally stable, biocompatible polycaprolactone (PCL) shell. The concentration of luminescent probe molecules was altered and there were two levels of incubation temperature: 37oC (≈ body temperature) and 50oC. To examine probe-matrix interaction effects, four polymers were used as core host matrices: Nylon-6, polyether sulfone (PES), polyethylene terephthalate (PET), polysulfone (PSU). All fibers doped with luminescent probes were subjected to long-term continuous light excitation to induce photobleaching. In addition, β-carotene was used as an additive to potentially reduce the detriments caused by photobleaching. Finally, the phosphorescent lifetime of all the aforementioned polymers was examined before and after continuous photoexcitation to explore whether photobleaching and core polymer host had significant effects on the measured phosphorescent lifetimes. Overall, we found that the choice of core polymer matrix and luminescent probe concentration had significant effects on sensor performance in the presence of photobleaching. Also, the choice of polymer matrix and induced photobleaching had significant effects on measured lifetime.