A Mask for Every Occasion: How the Face Mask Connects Medicine, Fashion, and Politics in Chinese Narratives 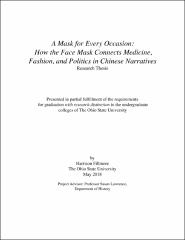 The habit of mask wearing, which is now recognized internationally as a predominantly East Asian (especially Chinese) practice (although reputedly Chinese in origin), was grounded in Western medical ideology. Nowadays, people who wear masks in East Asia--and travelers from East Asia who wear masks abroad--wear them for many reasons, including but not limited to: to avoid infecting others with an illness the mask-wearer suffers from, to avoid being infected with an illness from those around them, to protect from smog, sandstorms, or other harmful airborne particulate matter, to avoid breathing in cold air, to cover a breakout of acne, or to be cute or fashionable. Instead of just reporting a list of the many reasons why people in China choose to wear face masks, this paper seeks to trace how the mask changed throughout several different historical contexts, how it came to be used for several different purposes, and how it became entangled in several different public connotations. By drawing upon facts and figures from history, anthropological theory, and narrative analyses of interviews with Chinese citizens, I explore the use of face masks, their history, and their influence. All at once, the mask is a medical device, a fashion statement, a visible narrative, and a cultural symbol. To know exactly in which ways the mask has influenced Chinese culture will require more research; it may have influenced the generally accepted definition of disease, cultural opinions on hygiene and the environment, and the modern state of Traditional Chinese Medicine. The history and impact of the mask illustrate the power of cultural narrative, and show how a simple device can facilitate the development and mutual influence of ideas.

The presentation of this research won First Place at the Denman Undergraduate Research Forum in the category "History of People and Art" in 2018.