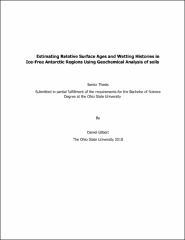 The ice-free regions of Antarctica are polar deserts where atmospheric aerosols are deposited and can accumulate over time in the surface soils. The McMurdo Dry Valleys (MDV) are the largest ice-free area on the continent and contain soils ranging in age for a few 1000's of years to as old as 14 million years. Soils in the Transantarctic Mountains to the south of MDV have similar ages. These ages relate to the waxing and waning of both the West and the East Antarctic Ice Sheets as the climate has changed. For this reason, types and concentrations of water soluble salts found in these soils can be used as a relative surface age dating parameter. I have measured the elemental composition of soils from several, ice-free locations in Antarctica. They range from coastal sites a few 10s of meters above sea level, to sites 800 kilometers inland and elevations of 2500m. Soils samples were leached with deionized water and filtered through 0.4µm filters. The leachate was then analyzed using ion chromatography to determine concentrations of the anions Cl-, F-, NO3-, SO42-, and PO43-. The leachate was also analyzed by an inductively coupled plasma optical emission spectrometer to measure the concentrations of Li and B. Locations further inland and at higher elevations tend to have higher concentrations of NO3-, Cl-, SO42-, and F-. Most coastal sites at high elevations generally had higher Cl- values. Chloride, NO3-, and B are clearly atmospherically derived, suggesting that if deposition fluxes are known, their concentrations may be good indicators of relative time since last wetting of the soil, including periods of glacial coverage. Analyte concentrations were compared against elevation and distance inland using ANOVA tests. Li concentrations vary the least with elevation and distance, suggesting it is not sourced from the atmosphere, but is produced in situ via chemical weathering. These data were compared to previous work on the surface exposure age of these surfaces and discussed in terms of glacier movement during the Pleistocene.