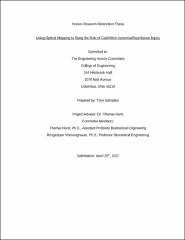 Heart disease is a major cause of death in the United States and a majority of the deaths are due to sudden cardiac death (SCD). A subset of these deaths are due to ventricular fibrillation, a type of cardiac arrhythmia that is often a consequence of cardiac ischemia and reperfusion. Understanding the mechanisms behind cardiac arrhythmias will improve the knowledge available for the development of clinical treatments. This study aims to focus on the molecular mechanisms underlying arrhythmia in the setting of ischemia and reperfusion (I/R). Specifically, my works test the hypothesis that I/R induced arrhythmias depend on the action of the multifunctional Ca2+/calmodulin dependent kinase II (CaMKII) on the voltage-gated sodium channel Nav1.5. Previous studies have identified a specific amino acid (Ser571) on Nav1.5 that is targeted by CaMKII, with implications for channel gating and cell excitability. The role CaMKII plays in arrhythmias will be studied through novel mouse models with genetic manipulation of the Ser571 site in Nav1.5 (S571A and S571E mice), together with wildtype mice as a control. Optical mapping, a modern approach to studying the electrophysiology of the heart in real-time, will be used with an ischemia and reperfusion protocol. The studies revealed a prolongation of action potential duration (APD), increased recovery time, and increased arrhythmia susceptibility in S571E and WT mice versus S571A mice. Selectively targeting this CaMKII-dependent pathway to decrease late sodium current may have clinical application for reducing arrhythmias in acute ischemia and reperfusion settings.