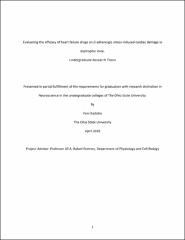 Background: Duchenne muscular dystrophy (DMD) is an X-linked neuromuscular disorder caused by the absence of dystrophin. It is characterized by progressive muscle weakness and atrophy. Previous studies show combined treatment with angiotensin converting enzyme inhibitor, lisinopril, and mineralocorticoid receptor antagonist, spironolactone, can improve skeletal muscle function and pathology in Duchenne muscular dystrophy modeled mice. Cardiomyopathy is the leading cause of death in patients with DMD and beta-adrenergic stress is also experienced in these patient in the clinic. Objective: This study aims to determine whether indirect and direct MR antagonists, lisinopril and spironolactone, which are known to improve cardiac function and pathology at baseline in preclinical models, will prevent against cardiac damage due to isoproterenol induced beta-adrenergic stress in the dystrophin-deficient genotypic mdx mouse model of DMD. Methods: Two treatment groups, the lisinopril and spironolactone (LS) group and the beta-blocker group. The LS group included treated mdx males (n=10) and untreated (n=10), treated (n=10) and untreated mdx females (n=5) along with 10 male and 5 female (n=15) C57 BL 10 wild type controls. The LS group was treated with LS in water bottles for 17 weeks. The beta-blocker experiment had 2 groups of male mdx mice, untreated (n=5) or treated (n=11) with the beta-blocker, metoprolol in water bottles for 2 weeks. At the end of treatment, evans blue dye was injected in all the mice then 24 hours later isoproterenol was injected every 2 hours for a total of 3 times. The heart was dissected and histological quantifications were taken place. Results: Significant differences were found when using an AVOVA to compare the C57, untreated and LS treated group. Followed by a Dunnett test, the significant difference was seen between the C57 group and the untreated group. However, there was no significant difference between the LS treated and untreated groups using a Dunnett test. There was no significant difference in damage between the treated beta-blocker group and untreated group. Conclusions: Overall these data suggest that lisinopril and spironolactone are not effective at preventing beta-adrenergic stress induced damage in the mdx model of DMD.