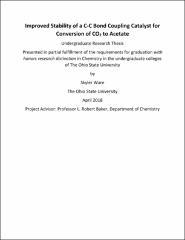 The electrochemical conversion of carbon dioxide to value-added, multi-carbon products has been studied as a pathway to renewable fuel sources and as an alternative to current carbon capture and storage methods. Delafossite copper iron oxide films have been shown to thermally fixate carbon dioxide and selectively catalyze carbon-carbon bond coupling from CO2 to produce acetate. However, the catalyst alone is not stable and deactivates after approximately ten minutes following the reductive dissolution of surface iron species. The addition of gaseous oxygen as a sacrificial electron acceptor prevents the reductive dissolution of iron and stabilizes the catalyst for several hours; however, excess oxygen scavenges the electrons used for acetate production, resulting in lower yield and reduced conversion efficiency. The purpose of this study was to examine the effects of oxygen at various flow rates on catalyst stability and on acetate formation, as well as to determine the sources of carbon and hydrogen in the final product. The electrolyte solution was purged with both carbon dioxide and oxygen before and during electrolysis using the copper iron oxide catalyst as the working electrode. The optimal oxygen flow rate significantly slowed iron reduction and stabilized the catalyst for up to 12 hours with only a modest drop in acetate selectivity. This enhanced stability allowed further characterization of the carbon source as thermally fixed ambient CO2, which occurs during annealing of the catalyst. Future studies will further examine the surface chemistry over long-term reductions, including the full mechanism of acetate production and the role of both metals and their oxidation states in the catalytic process.