In vivo characterization of FACT complex proteins in C. elegans 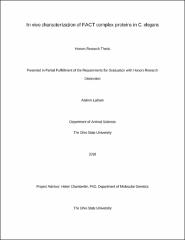 FACT (facilitates chromatin transcription) is a protein complex involved in transcriptional regulation, DNA replication, and DNA repair processes in eukaryotic organisms. FACT allows transcriptional enzymes to access the DNA for transcription and translation into proteins and is highly conserved across species. However, there is limited knowledge about FACT complexes in multicellular organisms. The objective of this study is to discover more information about the composition and expression of the FACT complex and its role in multicellular organisms by tagging the genes that code for the FACT subunits in order to view the subsequent proteins in the nematode Caenorhabditis elegans. The complex is composed of two proteins: SSRP1 and SPT16. In C. elegans, two genes (hmg-3 and hmg-4) encode SSRP1 proteins, and one gene (spt-16) encodes SPT16. In order to determine the presence of the target subunits in C. elegans, sequences encoding a fluorescent tag were inserted into each gene using CRISPR-mediated genome editing. Using fluorescent microscopy conditions, the target proteins were visible in vivo, revealing the areas of the organism where the subunits were present. The location of the product in the cells of C. elegans differed between the HMG-3 and HMG-4 proteins. HMG-3 had somatic presence during the embryonic stage, but in later larval stages the product was confined to the germline. In contrast, HMG-4 and SPT-16 were present in the somatic and germ cells throughout the developmental process of the organisms. The FACT complex's functions in DNA regulation and repair make it a potential target for cancer and HIV research. Gaining information about the expression of the FACT complex's proteins at different life stages in a multicellular eukaryote creates a base from which future research can draw. Future research may include characterizing the interactions between protein subunits, and determining the number of each subunit protein in the complex.