The role of CaMKII-dependent augmented INa,L in arrhythmias during acute β-adrenergic stimulation 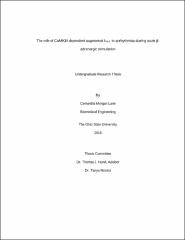