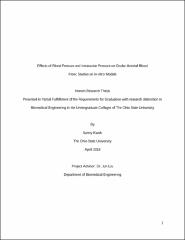 Glaucoma is the second leading cause of blindness around the world. Diagnosis of this disease often occurs after the detection of noticeable symptoms, by which point irreversible damage has already been incurred. Glaucoma develops when stress factors induce retinal ganglion cell death, resulting in vision loss. In particular, prolonged reduction in blood flow into the eye may lead to ocular tissue malnutrition and hypoxia, eventually leading to cell death. The posterior ciliary arteries are the main blood supply to the optic nerve head, where glaucoma damages occur first. These arteries traverse the posterior peripapillary sclera to penetrate the eye. This study aims to investigate the effects that different combinations of intraocular pressure, blood pressure, and scleral stiffness have on blood flow of in vitro posterior ciliary artery models. To perform this study, a modeling system of the peripapillary sclera was developed. A number of different polymers (including agarose, polydimethylsiloxane, and industrial TC-5005 gels) were explored to model scleral tissues with various compressive moduli. Multiple models of industrial TC-5005 and agarose were made to mimic sclera of increasing stiffness. The polymers were molded and cured into wall-less vessels and placed into a perfusion chamber where pressure was separately applied to the outside (intraocular) and inside (blood) the vessel at different combinations. Five models of stiffness ranging from 30 – 415 kPa were fabricated for flow tests. The resulting change in fluid flow rate was recorded to determine the combinatory effects of the two pressures through these phantoms. It was found that across all combinations of pressures, the fluid flow would initially increase with stiffness, then upon reaching ~60 kPa achieve a maximum flow. For models much stiffer than 60 kPa, a significant decrease in fluid flow as much as 87% was observed. The initial increase in fluid flow from 30 to 60 kPa may be evidence of the protective effects of scleral stiffening predicted in previous research. This study represents a first step in understanding the potential impacts of the scleral compressive modulus on the fluid flow rate under biological effects by IOP and BP, supporting the hypothesis that sclera stiffness may play an important role in glaucomatous development.

Placed in 1st Place in the category of Cell Biology and Physiology, Denman Forum

Research is partially supported by NIHRO1EY020929