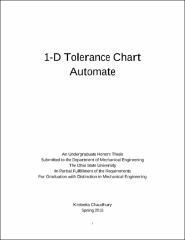 In mass production, for ensuring interchangeability of parts and proper function, design engineer needs to specify the range of geometric and dimensional variations that is acceptable. This is done using Geometric Dimensioning and Tolerancing (GD&T) which has classified 14 different types of geometric characteristics needed for specification. When designers develop a GD&T scheme, they need to ensure that dependent dimensions such as clearances are within range to allow assembly and proper function. This requires analysis of the tolerance scheme. 3-D tolerance analysis is a non-linear problem that cannot be expressed in closed form so various simplified methods have been devised to do tolerance analysis. One of them is called 1-D minimum and maximum chart, which does tolerance analysis in one direction control at a time so it misses out in any couplings between the directions. However, it is still accurate for certain type of assemblies such as disk stack on a single shaft in a turbine. So, because of its simplicity it is a popular method used by many designers. However, the procedure is manual and requires mastering a large number of rules, each specific to a tolerance class to make the chart. The purpose of this project is to automate the 1-D tolerance analysis process by making a 1-D Tolerance Stack Automate that will have all the tolerance analysis rules embedded in it and will perform the stack calculations automatically, freeing the user from learning the rules. The tool has been developed within MS Excel. Six files were made to incorporate all the rules based on tolerance class, based on the types of user inputs and similarity in rules required to perform the analysis. These six files are: (1) Size and basic dimension; (2) Runout and concentricity; (3) Profile; (4) Orientation and form (not FOS); (5) Orientation, straightness and cylindricity (FOS); (6) Position. Then each of these files were combined into one master MS Excel file. In total 11 test cases were performed on the individual files and the master file using different geometric parts so that each condition is evaluated. The results from 1-D chart performed in Excel have been verified with those performed manually as both the approaches used standard GD&T rules.