Nationalism and Cultural Heritage in Indonesia: A Local Study of Borobudur Temple 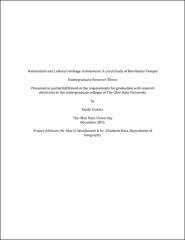 This study was born from an attempt to explain why Borobudur, the largest Buddhist temple in the world, located in Central Java, Indonesia, is a national icon of a country that is predominantly Muslim, and has been for centuries. By reconciling the concepts of nationalism, tourism, and heritage, I argue that, in a country where diversity has long been a source of conflict and fragmentation, Borobudur’s development into a tourist-oriented heritage site during the New Order regime was part of a larger strategy to establish an “official” culture. To investigate this, I carried out on-site ethnographic fieldwork for four weeks around Borobudur; this involved interviews with locals as well as officials from UNESCO and the Indonesian Government, and participant observation through a visit and guided tour of the temple. My research indicated that through the construction of Borobudur Tourist Park, the temple’s value was deliberately shifted from a source of local cultural heritage to a secularized national icon. I determined that Borobudur Park has been constructed to reflect its value as national heritage; due to the changes involved in the site’s development, local livelihoods were upturned, which resulted in locals’ feelings of detachment from their heritage, and a shift in the way they characterize their relationship with the temple—namely, from cultural inspiration and belonging to a source of employment and national prestige. Through an exploration of the counter-narratives locals attached to Borobudur, I found that the lack of religious affiliation between the temple and the surrounding community was irrelevant to understanding Borobudur’s local significance, which instead was derived from its ongoing interaction with residents and its role as the center of community life for centuries. These findings not only support my original claim, but also suggest further implications for the politicization of heritage in the construction of heritage tourist sites, and the marginalization of local cultural values that occurs as a result.