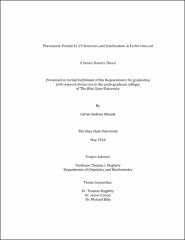 Euplotes raikovi is a unicellular protozoan that has developed a complex network of protein pheromones used in self-non-self recognition among mating types of the species. Members of the Er-pheromone family are small, between 38-51 amino acids, disulfide-rich proteins with a characteristic up-down-up three-helix bundle. Er-23 is the largest member of the family with 51 amino acids, 10 of which are cysteine that participate in the formation of 5 individual disulfide bonds. The amino acid sequences participating in the up-down-up helix architecture have been computationally predicted to form beta-sheet secondary structure. This project seeks to use Er-23 as a model for investigating the relationship between protein structure, stability, and amino acid sequence—an important topic in the design of medically useful proteins. The Anfinsen hypothesis holds that amino acid sequence determines native protein conformation, driven by thermodynamic forces. However, Luporini and Wüthrich hypothesize that the disulfide bonds of Er-23 maintain the helix architecture despite computational prediction of exclusive beta- sheet structure presence. Here we describe the heterologous-expression of Er-23 in Escherichia coli and its characterization using a variety of methods, including the development of an NMR- based protein concentration estimation technique. We intend to solve a highly constrained NMR solution structure of heterologous Er-23 for comparison with the homologous Er-23 structure previously solved using natural abundance. Additionally, we describe the investigation of the role of individual disulfide bonds in the structure and stability of heterologously-expressed Er-23 through the replacement of each cysteine disulfide pair with both Ala-Val and Val-Ala mutations. Analysis of Cys-free mutant structure and stability will be completed by comparison of wild-type Er-23 using both CD and NMR studies. We also intend to study disulfide importance by performing the famous Anfinsen reversible denaturation experiment using heterologous Er-23. Preliminary results from CD and NMR studies suggest that Er-23 is adopting the wild-type fold when expressed in the cytoplasm of E. coli. Expression and purification of Cys-free mutants has been partially completed with successful results.