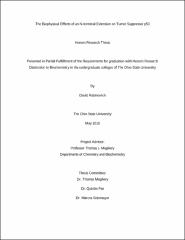 Tumor suppressor p53 is a transcription factor that is central to a system of cell cycle regulation and the prevention of cancer. The C. elegans p53 homolog CEP1 is more stable than human p53. It has been hypothesized that this is due in large part to a specific segment known as the S7S8 turn. The S7S8 turn is ten residues in human p53 but the analogous structure is only six amino acids in C. elegans p53. Because the turn is shorter and likely less flexible in C. elegans p53 than in human p53, it is hypothesized that this elongated turn in human p53 lends to increased movement and instability. Therefore, shortening the S7S8 turn in p53 might stabilize the turn and the entire protein. In addition to the S7S8 turn, a focus of this research is centered on understanding the effects of adding an N-terminal extension to the core domain of p53. This segment was initially added for the purpose of reducing aggregation. However, initial experiments suggest that this segment might also affect stability and function. Two sets of a panel of eight turn variants with differing sizes and physical properties were synthesized to compare the variants with the N-terminal extension and the ones without it. The Magliery lab has developed a screen which tests the DNA-binding ability of p53. The screen was made with green fluorescent protein that is negatively suppressed in the presence of active p53 protein. Because none of the mutations made to our p53 mutants are in the DNA-binding region, it is hypothesized that any variation in fluorescence is due to differences in stability. Western blots were performed to further probe the screen and test this hypothesis. Finally, circular dichroism, differential scanning fluorimetry, and thermal melts were used to distinguish biophysical differences between various turn mutants with and without the N-terminal extension.