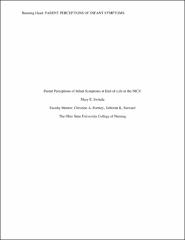 Purpose and Significance: Despite significant technological advances, many infants admitted to the neonatal intensive care unit (NICU) do not survive. Limited research has focused on symptoms infants may experience as they approach end-of-life. The purpose of this study was to examine concordance in infant symptom identification between medical record and parental report. Conceptual Framework: The Framework for a Good Neonatal Death was used to guide this study. This framework includes the interaction of three domains: infant, parents, and nurses that may result in an improved experience at end-of-life. Symptom identification and parent perceptions are important concepts included within these domains. Method: 433 parents (248 mothers, 185 fathers) of infants who died in the NICU between 2009 and 2014 were invited to participate. Following informed consent, parents of 40 infants [40 mothers (M age = 33 years), 27 fathers (M age = 37 years)] reported on the presence of symptoms during the last week of their infant’s life. Medical record reviews were also completed for each infant. Parent survey and chart data were compared for six symptoms for which there was overlapping data: pain, agitation, respiratory distress, feeding intolerance, seizures, and lethargy. Results: Parents identified several symptoms (Mother M =2.8, Father M = 2.6, range = 1-5) with pain, agitation, and respiratory distress most commonly endorsed. Within the 27 parental dyads, mothers reported agitation significantly more than fathers, while fathers reported seizures significantly more than mothers. Comparisons between the medical record and parental report of symptoms demonstrated that both parents reported seizures more often than documented in the medical record. Parents reported frequencies similar to the chart for the presence of pain, agitation, respiratory distress, feeding intolerance, and lethargy. Conclusions: Parents demonstrate awareness of the infant’s well-being at end-of-life which closely matches medical staff documentation, however perceptions may differ between parents. Parent perceptions of infant symptom burden likely plays an important role in decision-making regarding treatment. Future research is needed to further understand parents’ views of symptom management and potential suffering as it relates to end-of-life care.