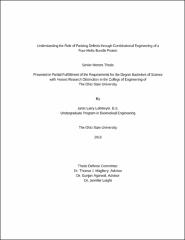 Library characterization is a useful method to understand the structural principles that govern tertiary and quaternary folding of proteins. Model proteins, such as Rop, are frequently used to facilitate better insight to these structural motifs. Rop is a small sixty-three residue protein that forms an antiparallel, homodimeric four helix bundle. It regulates plasmid copy number by facilitating binding of RNA I to the priming RNA II of ColE1 origin plasmids, which makes it favorable for in vivo cell based activity screens. The hydrophobic core consists of an eight layer heptad repeat pattern and studies have demonstrated that perturbation of the core can drastically alter RNA binding ability, shift the thermal stability, and change the antiparallel/parallel conformation. The packing pattern at the Arg-55 and Phe-56 positions is reversed from the regular heptad repeat and it is not well understood as to why the pattern shifts. Some studies have suggested that the phenylalanine acts as a hydrophobic plug to the core, but do not fully explain the structural impacts. This investigation, based on preliminary results from the R55 point study, made a combinatorial library and engineered non-native variants to better understand the packing effects of the 55th and 56th positions. The variants were classified by activity and characterized through thermal and chemical melts. The correlation of stability data with structural information from crystallography and NMR further defined the role of Arg-55 and Phe-56 and quantify core packing constraints.