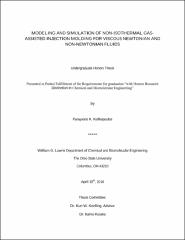 Gas-assisted injection molding (GAIM) process is the injection of a molten polymer resin into a cooled mold cavity simultaneously or followed by the injection of pressurized gas into the resin to fill out the mold cavity and form hollow pockets in the resin. Current gas-assisted injection molding simulations do not accurately predict hydrodynamic coating thickness due to the frozen layer created by the polymer melt in non-isothermal systems. The proposed models are a hybrid control-volume finite element/finite-difference method to obtain a numerical simulation of gas-assisted injection molding for non-isothermal systems, at high capillary numbers, for Newtonian and non-Newtonian fluids. The selected viscous Newtonian fluids exhibited viscosities with high and low temperature dependencies. The non-Newtonian fluids that were selected had shear thinning viscosities that could be modeled using the power law. Previous studies employed a number of assumptions in order to simplify the simulation model, however, those assumptions contributed to a significant deviation error in predicting the coating thickness. The proposed Newtonian model was compared with experimental data and the results confirmed that the simulation was reliable for predicting maximum fractional coverage and delay time at which maximum fractional coverage occurred. On average the model has a maximum deviation of 4% in the hydrodynamic coating thickness and 15% in the predicted delay time. Additionally, the effects of tube diameter, temperature difference between the polymer melt and cooling fluid, and the heat transfer coefficient, on fractional coverage were isolated and master curves were developed over a large range of operating conditions using dimensionless variables. Due to the lack of experimental data, the non-Newtonian model was compared to previous simulations done by other researchers. Compared to existing simulation models, the recommended models are simpler and require less computing power without compromising their accuracy, thus, functioning as an alternative approach to gas-assisted injection molding simulations. Accurately predicting hydrodynamic coating thickness has a number of applications in the plastics and polymer industry, specifically in decreasing production costs with faster cycle times, improving product quality and reducing resin costs.