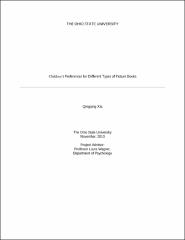 Picture books are a recourse for children to gain basic world knowledge, practice cognitive thinking, and build language skills (Strasser & Seplocah, 2007). This study examined elements from children, parents or picture books that might have a potential influence over children's preferences towards picture books. There are four research predictions for the study: 1) Children would prefer the picture books with the major character of matching gender to themselves; 2) Children would prefer the picture books' minimal suggested reading age matches their own; 3) Parental influence, which is frequency of joint reading and their knowledge of picture book, would positively correlate with children's average preference scores; 4) Younger children would prefer picture books with higher visual stimulation level than older readers. A set of 100 books were analyzed with characteristics that might influence children's reading preferences. These factors included gender of the major character, visual stimulation level, and minimal suggested reading age. From an online survey,142 valid responses from parents were collected. These information included the basic demographics about their children, as well as their children's preference scores of this set of books. This study did not support any of the predictions. However, the data suggested that parents in general rated that girls preferred picture books more so than boys.