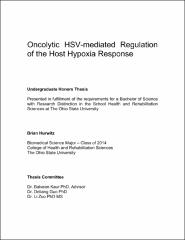 Glioblastoma (GBM) is the most common and deadly primary brain tumor, accounting for over 10,000 new cancer diagnoses in the United States each year. The poor prognosis for GBM patients necessitates novel biological treatments. One such approach is the use of oncolytic herpes simplex virus 1 (oHSV). Like many novel treatments oHSV therapy causes off target effects that are not yet well understood. Our lab has demonstrated that oHSV treatment increases the vascularity of brain tumors. The goal of this study is to determine the mechanism by which oHSV treatment increases the vascularity of brain tumors. Preliminary data suggested the hypoxia inducible factor-1 alpha (HIF1α) may be activated in cells infected with oHSV, even in normal oxygen conditions. HIF1α is a transcription factor, which activates a variety of genes in response to a lack of oxygen. We hypothesized that HIF1α activation may be responsible for the increased vascularity of oHSV treated brain tumors. A screen of targetscan.org for the predicted target genes of herpes simplex virus 1 (HSV-1) revealed multiple miRNAs predicted to target a protein called, factor inhibiting HIF1α (FIH). This protein functionally inhibits HIF1α activation by preventing the binding of HIF1α to DNA. We believed that FIH would be negatively regulated in GBM cells infected with oHSV, thus allowing HIF1α activation. In this study, we demonstrate that HSV-1 expresses two miRNA molecules, which target and down regulate FIH. Transfection of miRNA inhibitors (antagomirs) was able to successfully abrogate the virus' ability to down regulate FIH as demonstrated by quantitative PCR and western blot. Moreover, transfection of HSV-1 miRNA mimics in the absence of virus was able to down regulate FIH protein levels (western blot) and activate the expression of a variety of HIF1α driven genes, including VEGF and IL-8 (quantitative PCR). However, after analyzing HIF1α promoter activity in a variety of cell lines, we determined that HIF1α was not activated during oHSV infection. The expression of VEGF and IL-8 was likely due to the activation of another transcription factor.