Investigation of non-canonical enzyme activities associated with tRNAHis in eukaryotes 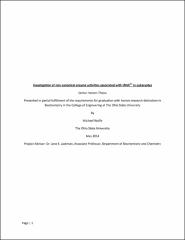 Transfer RNA are the most heavily modified nucleic acids in the cell. These complex molecules present the difficult challenge of retaining almost identical secondary and tertiary structure while still maintaining unique identity elements such that individual tRNA species are aminoacylated with the correct amino acid by their cognate amino-acyl tRNA synthetase. To accomplish this specificity, tRNA species have coevolved with a diverse set of enzymes that recognize and modify each tRNA to the mature form used by the ribosomal machinery. The interplay between tRNAHisguanylyltransferase (Thg1) and histidine aminoacyl tRNA synthetase (HisRS) in the context of tRNAHis maturation represent a fascinating system with which to study these questions related to tRNA identity. Thg1 is part of a family of enzymes found in all three domains of life, members of which catalyze an unprecedented 3’-5’ nucleotide addition reaction to post-transcriptionally add a critical G-1 residue to the 5’ end of tRNAHis that is a necessary identity element for the HisRS in organisms from all three domains of life. Structural similarities between canonical DNA/RNA polymerases and eukaryotic Thg1 suggest unexpected connections between these enzyme activities. Recent structural and transient kinetic analysis of human Thg1 revealed several important mechanistic features, including the roles of several highly conserved residues in the chemistry of 3'-5' addition. However, many mechanistic questions, particularly related to the ability of Thg1 to bind to its tRNA substrates, remain unsolved. Since tRNA is a relatively large molecule, similar in overall molecular weight to the mass of a single Thg1 monomer, and Thg1 has been observed to exist as a tetramer, it was hypothesized that the multimeric form of the enzyme is critical for recognition of the large tRNA substrate. For this reason, several highly conserved residues were investigated that are predicted to be involved in Thg1 multimerization. Previously, variants of human Thg1 believed to disrupt the dimer-dimer interface of the enzyme based on their positions in the crystal structure had been characterized in vitro. The first aim of this project was to test the function of these particular variants in vivo in yeast. This objective was accomplished using a yeast complementation assay to test whether each variant was able to support growth in the absence of the wild type THG1 gene. The in vivo results were found to largely mirror the previous in vitro characterization, supporting the predicted role of these particular residues in maintaining the dimer-dimer interface. The second aim of this project was to identify novel residues involved in different steps of the 3'-5' addition reaction catalyzed by Thg1. Previously, a collection of temperature-sensitive yeast Thg1 variants were identified through random mutagenesis of the yeast THG1 gene; interestingly these variants were observed to form distinct complementation groups suggestive of possible complementary functions in the context of the wild-type enzyme. Individual variants were expressed, purified and characterized in vitro using a G-1-addition activity assay. Although most variants led to strong catalytic defects consistent with severe folding defects associated with the alterations, a new interaction involving residues from the extreme N- and C-termini of Thg1 was identified through this work. The third and final aim of this project was to identify the molecular determinants for HisRS specificity in canonical and non-canonical HisRS enzymes. Investigations of diverse eukaryotes, such as Trypanosoma brucei and Acanthamoeba castellanii, revealed that the nuclear-encoded tRNAHis in these species lacks the characteristic G-1 residue, and the native HisRS from these species efficiently aminoacylates tRNAHis independent of this critical identity element. To determine the molecular basis for this difference, residues were exchanged between G-1-dependent and G-1-independent HisRS and the variant enzymes were tested for aminoacylation activity. This led to the identification of residue M160 in S. cerevisiae as a potential molecular determinant for G-1 specificity in canonical HisRS enzymes. Taken together, this study has widened understanding of the molecular details of interaction between enzymes that are crucial for proper tRNAHis maturation and their substrates, fundamentally advancing our understanding of this system that is critical for life.