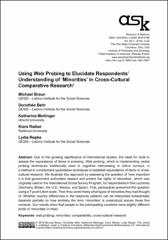 Due to the growing significance of international studies, the need for tools to assess the equivalence of items is pressing. Web probing, which is implementing verbal probing techniques traditionally used in cognitive interviewing in online surveys, is a method to complement quantitative techniques to establish equivalence of items in crosscultural research. We illustrate this approach by assessing the question of 'how important it is that government authorities respect and protect the rights of minorities', which was originally used in the International Social Survey Program, for respondents in five countries (Germany, Britain, the U.S., Mexico, and Spain). First, participants answered this question using a 7-point Likert scale. Then they wrote freely what types of minorities they had thought of. Whether country differences in the response patterns can be interpreted substantially depends partially on how similarly the term 'minorities' is understood across these five contexts. Our results show that people in the participating countries have slightly different kinds of 'minorities' in mind.