Reliability in Constrained Gauss-Markov Models: An Analytical and Differential Approach with Applications in Photogrammetry 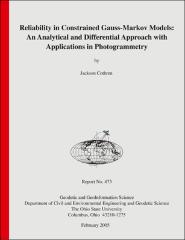 Reliability analysis explains the contribution of each observation in an estimation model to the overall redundancy of the model, taking into account the geometry of the network as well as the precision of the observations themselves. It is principally used to design networks resistant to outliers in the observations by making the outliers more detectible using standard statistical tests.It has been studied extensively, and principally, in Gauss- Markov models. We show how the same analysis may be extended to various constrained Gauss-Markov models and present preliminary work for its use in unconstrained Gauss-Helmert models. In particular, we analyze the prominent reliability matrix of the constrained model to separate the contribution of the constraints to the redundancy of the observations from the observations themselves. In addition, we make extensive use of matrix differential calculus to find the Jacobian of the reliability matrix with respect to the parameters that define the network through both the original design and constraint matrices. The resulting Jacobian matrix reveals the sensitivity of reliability matrix elements highlighting weak areas in the network where changes in observations may result in unreliable observations. We apply the analytical framework to photogrammetric networks in which exterior orientation parameters are directly observed by GPS/INS systems. Tie-point observations provide some redundancy and even a few collinear tie-point and tie-point distance constraints improve the reliability of these direct observations by as much as 33%. Using the same theory we compare networks in which tie-points are observed on multiple images (n-fold points) and tie-points are observed in photo pairs only (two-fold points). Apparently, the use of two-fold tiepoints does not significantly degrade the reliability of the direct exterior observation observations. Coplanarity constraints added to the common two-fold points do not add significantly to the reliability of the direct exterior orientation observations. The differential calculus results may also be used to provide a new measure of redundancy number stability in networks. We show that a typical photogrammetric network with n-fold tie-points was less stable with respect to at least some tie-point movement than an equivalent network with n-fold tie-points decomposed into many two-fold tie-points.

This report was prepared by Jackson Cothren, a graduate research associate in the Department of Civil and Environmental Engineering and Geodetic Science at the Ohio State University, under the supervision of Professor Burkhard Schaffrin.
This report was also submitted to the Graduate School of the Ohio State University as a dissertation in partial fulfillment of the requirements for the Ph.D. degree.