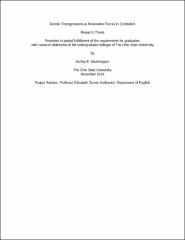 It is often ignored that the female characters who crossdress in Shakespeare’s plays are also travelers. This study merges two critical frameworks in examination of Shakespeare's late Romance Cymbeline--those of early modern women travelers and performed crossdressing on the Renaissance stage, which allows for a more thorough understanding of the play's heroine. Imogen’s ability to transition between gender identities while physically moving from place to place represents common threats to early modern gender systems, yet her inherent femininity continually shows itself—marginalizing her within the play. She enacts transgressive behavior in theory, but she does not undergo a gender transformation. In Imogen, Shakespeare presents a female character who engages in behavior that early modern audiences would have recognized as rebellious, but her seeming challenges to gender roles are superficial and eventually rejected; in fact, Shakespeare’s depiction of gender transgression in Cymbeline legitimates the binary gender system.