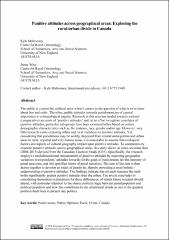 The public is a powerful political actor when it comes to the question of what is to be done about law and order. Therefore, public attitudes towards punishment are of central importance to criminological inquiry. Research in this area has tended towards national (comparative) accounts of 'punitive attitudes' and, in an effort to explore correlates of punitive attitudes, particular sub-groups have been examined often based on certain demographic characteristics such as, for instance, race, gender and/or age. However, very little research exists exploring urban and rural variations in punitive attitudes. Yet, considering that populations may be widely dispersed from central metropolitan and urban areas to rural, regional and very remote areas, it is reasonable to assume that ecological factors and aspects of cultural geography impact upon punitive attitudes. To comparatively examine punitive attitudes across geographical areas, this study draws on cross-sectional data (2004-2015) derived from the Canadian Elections Study (CES). Specifically, the research employs a multidimensional measurement of punitive attitudes by exploring geographic variations in respondents' attitudes towards: (i) the goals of punishment; (ii) the intensity of penal sanctions; and (iii) specified forms of penal sanctions. The sum of the data is then drawn together to develop an index of punitivity, thereby providing a more holistic understanding of punitive attitudes. The findings indicate that on each measure the rural holds significantly greater punitive attitudes than the urban. The article concludes by considering theoretical explanations for these differences, of which future research should attend, with particular attention to the shared political logic between penal populism and political populism and how this contributes to the urban/rural divide as one of the greatest political fault lines in present day politics.