Disabled in rural Victoria: Exploring the intersection of victimisation, disability and rurality on access to justice 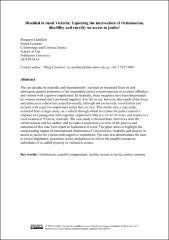 The last decade, in Australia and internationally, has seen an increased focus on and subsequent greater awareness of the inequitable justice system response to accused, offenders and victims with cognitive impairment. In Australia, these inequities have been documented by various national and state based inquiries. It is fair to say, however, that much of the focus and subsequent reform has centred primarily, although not exclusively, on offenders and accused with cognitive impairment rather than victims. This article uses a case study, extracted from a larger study, as a vehicle through which to explore the justice system's response to a young man with cognitive impairment who is a victim of crime, and resides in a rural location in Victoria, Australia. The case study is derived from interviews with the victim/witness and his mother, and provides a sequential overview of the process and outcomes of this case from report to finalisation at court. The paper seeks to highlight the compounding impact of intersectional dimensions of victimisation, disability and rurality on access to justice for victims with cognitive impairment. The case also demonstrates the need to review legislation, procedure, policy and practice to reflect the tangible impact on individuals of so called property or victimless crimes.