“It Stinks to High Heaven to Us”: How the Smells of a Proposed Manure Lagoon in Ohio Emerge as a Community Stressor 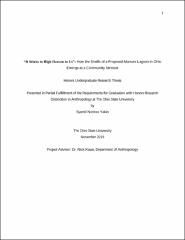 When a renewable energy and organics management firm sought to install a ten million-gallon manure lagoon in Wayne County, Ohio in early 2018, community members of Canaan Township began to rally together to oppose the proposal. One of the most frequently cited concerns was unwanted odors emanating from the lagoon. Through the analysis of public testimonies (N=28), this study examines how smell – or even fear of prospective smells – can come to represent a community stressor. Using qualitative data analysis software, recurring keywords in all 28 testimonies were coded and then theory-driven codes were developed to identify the ways that smell manifests as a community stressor. Using this method, residents’ testimonies identified both direct and indirect effects of unwanted smells associated with the lagoon. More than simple physical stimuli, the smells described by residents were associated with a host of problems, including potential health risks, projected decreases in residential property values, and disruption of everyday social life. Furthermore, residents’ testimonies showed how smells can emerge as a shared community problem. This paper thus highlights how undesirable odor can be perceived as both a source and symptom of social problems in a community, particularly in a time of imminent change.