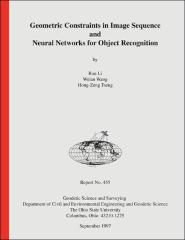 Spatially referenced mobile mapping image sequences contain rich information for applications such as transportation and utility management. Automatic object recognition and measurement from the images for reducing human operations and enhancing efficiency is a challenge in mobile mapping data processing. This report describes the research results of the project “Geometric Constrains in Image Sequences and Neural Networks for Object Recognition” supported by CFM/NASA (November 1996 – December 1997). Hopfield neural networks are applied to develop an algorithm for utility object recognition and photogrammetric measurements. Specifically, street light poles are modeled in the 3-D object space and compared with the corresponding features in the image sequences. The neurons of the net are formed by vector edge features from the model and images. The established Hopfield model is able to recognize light poles from a single image. It can also recognize and locate all light poles from the image sequences. It first recognizes all light pole features in the images. Secondly, corresponding light poles in stereo images are identified. Finally, the photogrammetric triangulation supplies 3-D positions of the poles in the object space. Such automation is particularly important for building special layers, for example traffic signs, fire hydrants, and road centerlines, to build GIS databases. The method developed has been successfully tested using mobile mapping image sequences. The major contributions of this research are · Establishment of a Hopfield neural network for object recognition from mobile mapping image sequences using 3-D object models and 2-D image features, · Application of the developed model to recognize and locate a specific light pole from a single image and from an image sequence, and to build a 3-D light pole database of all light poles, · Understanding of the behavior of individual parameters of the neural network and their impact on the recognition results, and · Development of the N2M2 system.