Satellite Geophysical Investigation of the Moon 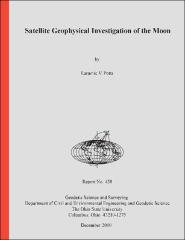 Lunar mass variations for the region ± 64° latitude related to composition, structure, isostatic and tectonic development of the crust, mantle, and core were developed using gravity and topography from Lunar Prospector, Clementine, and earlier satellite observations. Computed terrain gravity effects were spectrally correlated with the free-air anomalies to differentiate the terrain-correlated and -decorrelated free-air components. Annihilating terrain gravity effects, obtained by subtracting the terrain-correlated anomalies from the terrain gravity effects, were used to estimate the lunar Moho and crustal thicknesses by least squares inversion assuming compensation by crustal thickness variations. Inversion of the terrain-correlated anomalies obtained a radial adjustment model of the Moho that equilibrates the lunar topography. Terrain-decorrelated anomalies were differentiated into crustal and subcrustal components based on their correlation spectrum with the free-air anomalies. Inversion ofthe terrain-decorrelated crustal maxima over central basins predicted mare fill thicknesses up to a few kilometers. Inversion of the subcrustal components inferred boundary undulations for the core-mantle, asthenosphere-lithosphere, and middle-upper mantle during bombardment time. Nearly all major nearside basins exhibit mascon gravity anomalies reflecting mass concentrations from superisostatic mantle plugs plus mare fill, while farside basins mostly involve maslite gravity anomalies from mass deficiencies due to subisostatic mantle plugs with marginal or no mare fill. The preponderance of farside maslites suggests a weaker nearside lithosphere due to higher thermal gradients from enhanced abundances of radioactive elements in the nearside mantle and crust than the farside. Comparing crustal thicknesses with transient cavity diameters suggests a critical crustal thickness of about 30 km presumably differentiated the development of superisostatic and subisostatic mantle plugs on the farside. Inferred subcrustal boundary undulations tend to support mantle convection on the nearside involving diapiric rise of magma, whereas viscous entrainment on the farside inhibited basalt flooding of basins. The elevated core-mantle boundary beneath the Procellarum-lmbrium basins is consistent with uplifting effects of the Imbrium impact involved with the "Great Lunar Hotspot". Comparison of the gravity and topography spectra of the terrestrial planets suggests the Moon has the lowest temperature gradient and hydrostatic equilibrium.

This work has been partially supported by grants from NASA Goddard Space Flight Center (POS-97647-Z), Center for Mapping at The Ohio State University, and the Ohio Supercomputer Center.