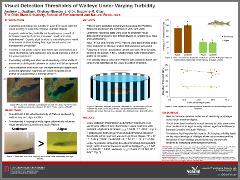 Anthropogenic alteration of freshwater systems is contributing to the loss of aquatic biodiversity globally and in Ohio. Among the key stressors affecting freshwaters is elevated turbidity in the form of suspended sediments and algae. Increasing turbidity is likely to alter the visual ecology (e.g. prey detection) of Lake Erie Walleye (Sander vitreus) through changes to the visual environment. Knowledge of how individual Walleye respond to decreased water clarity will provide a framework for understanding expected community and population level interactions. The objective of this study was to determine if the visual sensitivity (i.e. ability of an animal to distinguish between an object and its background) of Walleye is altered by sedimentary and algal turbidity, two forms of turbidity that are increasing in Lake Erie. A secondary objective was to determine if varying turbidity types differentially influence visual sensitivity of juvenile and adult Walleye. To determine how visual sensitivity is impacted by turbidity, optomotor response tests were used to establish visual detection thresholds under algal and sedimentary turbidity treatments. Turbidity was increased incrementally in a cylindrical tank until the fish stopped following a rotating black and white screen, indicating an inability to distinguish between the bars of the screen. Visual detection thresholds were significantly higher in sedimentary compared to algal turbidity for both adult (mean sediment +/- SE = 89.36 +/- 2.38, mean algae +/- SE = 38.12 +/- 0.55) and juvenile (mean sediment +/- SE = 99.98 +/- 5.31, mean algae +/- SE = 40.35 +/- 2.44) Walleye. Within treatment (turbidity type), no significant difference between the visual detection thresholds of juvenile and adult Walleye was found. These results indicate that algae may disrupt vision at a much lower level than suspended sediment. Walleye are a vital species in the Lake Erie sport fishing industry, as well as an ecological top predator, thus understanding the potential impacts of changing turbidity levels and types on the visual ecology of Walleye allows us to understand the dynamics of how populations may respond to increasing anthropogenic turbidity.