ORIGIN OF LARGE CARBONATE CONCRETIONS IN THE HURON MEMBER OF THE OHIO SHALE (DEVONIAN), CENTRAL OHIO 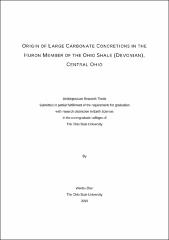 Large carbonate concretions are a prominent feature of the lower Huron Member of the Ohio Shale, a classic Devonian black shale, of Ohio. The origin of the carbonate concretions, and their growth history, has long remained largely unknown. The purpose of this study was to determine the mineralogy and interpret the early diagenesis of the concretions, with the ultimate aim of gaining insight into the early taphonomic history of organisms preserved in them. Specimens studied are from Franklin and Delaware counties, Ohio. Concretions were studied in the field, and in the laboratory using Scanning Electron Microscopy/Electron Dispersive Spectroscopy (SEM/EDS), and X-ray Diffraction (XRD) technology. XRD analysis reveals that the concretions are differentiated into three parts by distinct mineralogical differences. The inner core region consists largely of barite and calcium phosphate. The outer core is formed mostly of calcite and notable amount of quartz, and the outer rings (non-core zone) are composed largely of ankerite. The concretions thus seem to have experienced multiple growth phases. SEM analysis shows that some concretions have fossils resembling algae. The fossils are preserved in silica, which may be secondary after carbonate. The fossils were likely responsible in part for nucleating the concretions. The presence of calcium phosphate in the inner cores of concretions suggests that decaying animals also may have played a role in nucleating the Ohio Shale carbonate concretions.