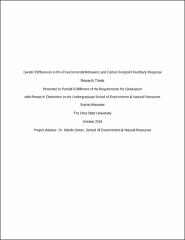 Feedback on individual consumption is a common tool used to influence recurring pro- environmental behaviors (PEBs; e.g., recycling, conserving water, and reducing energy consumption) and is an important component of climate change mitigation. One important aspect that can influence feedback’s efficacy in promoting PEB change among a given target audience is the way in which feedback messages are framed. Understanding how demographic variables, such as gender, influence response to feedback can inform more tailored – and perhaps more effective— feedback strategies. The goals of this project are to examine gender differences in baseline PEB and specific types of PEB and to understand how genders may respond differently in terms of cognitions, emotions, and behavior, to feedback framed positively, negatively, or neutrally. This study uses data from a sample of 393 U.S. adults who participated in an experiment in which they were randomly assigned to receive a positive, negative, or neutral feedback message after taking a carbon footprint quiz. Participants’ environmental behaviors were assessed before and after receiving the feedback. Overall, we found that females engaged in PEB significantly more frequently than males before and after all feedback messages, contradicting previous findings that women perform poorly relative to men after receiving negative feedback. Examining individual behaviors, before and after feedback, gender differences were found for females eating meat less frequently, conserving water, and using reusable bags and bottles. Females were also found to show engagement in PEB significantly more after receiving emotionally charged positive and negative feedback, while the opposite effect was observed for males, who engaged in the most PEB after receiving the neutral feedback valence. This research reveals gender as a determinant of PEB and response to carbon footprint feedback. These findings are important to climate mitigation and promoting higher PEB in society by informing more effective feedback intervention strategies that will likely continue to proliferate.