A Mechanistic and Kinetic Investigation of a Cobalt-Catalyzed Heterodimerization of Acrylates and 1,3-Dienes. Reaction Progress Analysis and a Potential Role of Cationic Cobalt(I) Intermediates 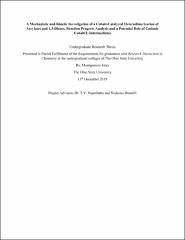 Very few process that directly couple alkenes and other feedstock materials are used in industry, with the exceptions being dimersol technology (propene dimerization), Shell Higher Olefin Process, and acrylonitrile dimerization. This is in part because of the low turnover number (TON) achieved by these processes, even though high regio- and enantioselectivies can be achieved. Using in situ IR spectroscopy to monitor a cobalt catalyzed heterodimerization between an acrylate and diene reaction progress kinetic analysis (RPKA) was carried out. This along with the isolation and characterization of low-valent cobalt catalyst precursors, many important mechanistic details were discovered. (i) The reaction possesses an induction period that requires two hours of stir time to generate the active catalyst. (ii) The time it takes for the reduction of Co(II) to Co(I) and then to [Co(I)]+ are the primary reason for the observed induction period. (iii) RPKA using in situ IR spectroscopy, the same excess experiments showed that the active catalyst concentration stays consistent throughout the reaction and low TON is due to the instability of the active [Co(I)]+ species. (iv) Different excess experiments show that the reaction is first order in the diene and zeroth order in the acrylate (confirmed by VTNA). (v) Through variation in catalyst loading, it is revealed that the reaction is first order in the catalyst (confirmed by VTNA). (vi) An oxidative addition/reduction elimination through Co(I)/Co(III) mechanism is proposed. Based on the mechanistic findings, the TON of the reaction was increased by a factor of 10 through increasing the initial concentration of the starting materials, specifically the diene, which is able to stabilize the active catalytic species. Isolation and characterization of an inactive tetra-ligated cationic Co(I) species suggest that the formation of this species is a possible pathway of deactivation of the catalyst.