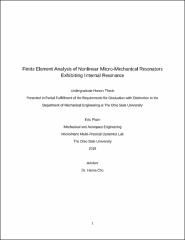 The development of micro-electromechanical systems (MEMS) has significantly advanced performance in numerous technological applications. It has allowed for better sensing, transduction, and actuation in small-scaled devices. Many MEMS applications utilize oscillating mechanical structures known as micro-resonators which can easily exhibit nonlinear behavior due to their miniature size and low damping. The nonlinearity, although complex, provides rich characteristics that can be exploited in order to enhance the performances of MEMS. One very interesting class of nonlinear characteristics is internal resonance where multiple modes are interacting simultaneously when the system is driven at one mode. This phenomenon occurs when there is intermodal energy transfer between the different oscillation modes. We aim to study internal resonance in more detail using the commercial finite element software ABAQUS to obtain better insights about this mechanism. We first designed a non-uniform fixed-fixed beam having an integer ratio between the modal frequencies. Second, we studied the possible ways to realize internal resonance using finite element simulation. Last of all, we investigated how different initial conditions and the effective parameters can affect the mechanism of intermodal energy transfer. A modal analysis was initially performed on the structure to obtain the desired mode shapes and frequencies. These specifications were then employed as initial conditions so that the structure can operate dynamically. By extracting the displacement data of the structure, the time response of the system was obtained. In order to investigate its resonance behavior, fast Fourier transform (FFT) and wavelet transform (WT) were applied to the time response to help visualize the frequency content of the system. By investigating the FFT and WT plots the levels of internal resonance were identified.