Integration of a Nuclear Rocket Engine onto a Lunar Hopper 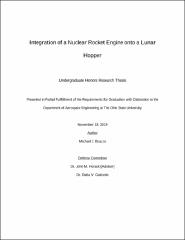 As human and robotic missions aim to establish a permanent presence on the Moon, there is a large economic and scientific incentive for the survey of the lunar surface for mineral deposits. The concept of a hopper is advantageous since roving can be impractical due to changing geography and uneven surfaces. Nuclear Thermal Propulsion (NTP) could be an ideal system to be integrated with a lunar hopper due to its high efficiency and dependency on a single propellant with a low atomic mass. The Moon has a low enough gravitational field that the thrust generated from an NTP engine will be high enough to lift mass off the surface and enter suborbital flight. In this paper we develop and articulate the concept of a lunar NTP hopper, a spacecraft that can land on the surface, take-off, and land again. These hops may potentially be repeated dozens of times due to the high thrust offered by the engine and maximize the number of landing sites. The goal of this paper was to find the range of possible solutions that will enable the lander to execute a simple set of design reference missions. While previous studies have focused on hypergolic propellants, the sole focus of this study is on NTP and integration onto a lunar testbed. Three different engines and dry mass combinations were tested among a list of possible mass ratios. A program in MATLAB was created so the optimum mass ratio, engine and dry mass combination could be highlighted. Upon reviewing the data, the Small Nuclear Reactor engine was selected with a target dry mass of 3500 kg. It was able to complete a total of 28, 16 and 8 hops for sub-orbital trajectories that were 5 km, 10, and 25 km in horizontal range.

Department of Mechanical and Aerospace Engineering