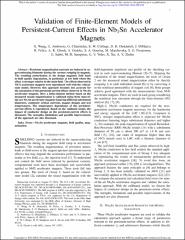 Persistent magnetization currents are induced in superconducting filaments during the current ramping in magnets. The resulting perturbation to the design magnetic field leads to field quality degradation, in particular at low field where the effect is stronger relative to the main field. The effects observed in NbTi accelerator magnets were reproduced well with the critical state model. However, this approach becomes less accurate for the calculation of the persistent-current effects observed in Nb3Sn accelerator magnets. Here a finite-element method based on the measured strand magnetization is validated using three state-of-the-art Nb3Sn accelerator magnets featuring different subelement diameters, conductor critical currents, magnet designs and test temperatures. The temperature dependence of the persistent current effects is reproduced. Based on the validated model, the impact of conductor design on the persistent-current effects is discussed. The strengths, limitations and possible improvements of the approach are also discussed.

The calculation of the persistent-current effects based on the direct application of the measured strand magnetization with finite-element models (Opera 2D) was validated using three state-of-the-art high-field Nb3Sn accelerator magnets featuring different magnetic configurations, coil layouts and test temperatures. The RRP conductors used in the magnets range from the 54/61 layout with a subelement diameter of 80 μm to the 150/169 layout with a 40 μm subelement diameter. The calculated main-field transfer function and the first allowed harmonic agree reasonably well with the measurements of most magnet cases. The model reproduces the observed temperature dependence of the persistent-current effects. With the validated model, impact of strand design was quantified with 54/61, 108/127 and 192/217 layouts. A 25%–35% reduction in b3 from 54/61 to 108/127 layout is observed and further reduction from 108/127 to 192/217 layout is negligible. The strengths, limitations and possible improvements of this approach were discussed.

Copyright (c) 2015 IEEE. Personal use is permitted. For any other purposes, permission must be obtained from the IEEE by emailing pubs-permissions@ieee.org.