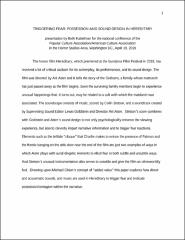 The horror film Hereditary, which premiered at the Sundance Film Festival in 2018, has received a lot of critical acclaim for its screenplay, its performances (especially that of Toni Collette), and its soundtrack. While much has also been said about how the music and non-diegetic soundscape are employed to build tension within the film, less has been written about the way in which director Ari Aster employs sound effects within the diegetic world to trigger fear reactions and impart information. Elements such as the telltale “cloque” that Charlie makes to evince the presence of Paimon and the frantic banging on the attic door near the end of the film—the cause of which is revealed to be something very disturbing and unexpected indeed—are just two examples of ways in which Aster employs aural diegetic elements to elicit fear in both subtle and unsubtle ways. Drawing upon Michael Chion’s concept of “added value” this paper explores how direct and acousmatic sounds are used in Hereditary to trigger fear and indicate possession/contagion within the narrative.